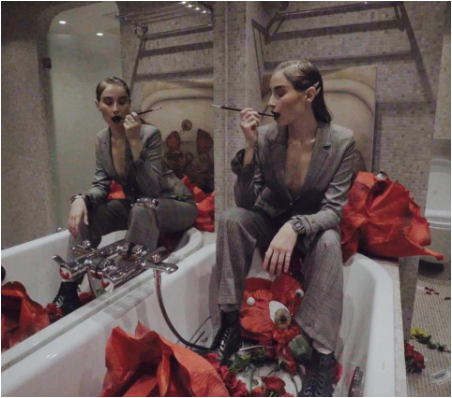 Electronic duo Sex of Insects have released their video for the thrilling single titled ‘Om Nah Omn’ remixed by Sailor & I. This video release follows the released remix EP of the same title, including remixes by Sailor & I, dOP and Anatoly Ylotana on 13th April via Ylotana Music. The video filmed at the Afterhalloween party in Moscow is a cinematic experience as the duo combine art and videography elements to an already spirited tune.

Sex Of Insects is the combined talents of Anatoly Ylotana (guitar) and Alexandra Bartashevich (vocals). The Parisian duo are inspired by acts such as Frank Zappa, Led Zeppelin, Black Sabbath and more recently Underworld, Daft Punk and Danny Tenaglia.  The duos signature sound is en experimental array of house, techno, as well as borrowed elements from other genres such as hip-hop and  rock and roll. The pair have risen to fame after their success within the European club-scene having done remixes for trailblazing artists DJ Koze, Phantogram, DJ T, DJ Hell, Damian Lazarus, Djuma Soundsystem and many more. Sex of Insects has grabbed the attention of tastemaker publications CLASH Magazine, Data Transmission, Konbini, Discobelle, Indie Shuffle, Electronic Groove, Clubbing Spain and Noctis Magazine as well as Youtube channels Deep Mix Nation and Madorasindahouse. Sex of Insects then went on to share stages with the likes of SURGEON, Lady Starlight, Hardware-Live, Gary Beck, Sterac aka Steve Rachmad, Shxcxchcxsh– Live, Black Asteroid, and µ-Ziq as well as RONE and Parra For Cuva.

Stockholm-based producer and vocalist Alexander Sjödin or best known as Sailor & I has become synonymous with defying the limits for intricate sounds with comparisons to artists like Bon Iver, The xx and Sigur Ros. The producer has released several singles and EPs which have propelled him to receiving immense support from noteworthy publications Billboard, Mixmag, Resident Advisor, DJ Mag, Dancing Astronaut, P&P, Magnetic Magazine and The Line of Best Fit as well as “airplay on BBC Radio 1 and KEXP, soon after releasing his latest album on Skint and [PIAS] Recordings respectively.”

The single ‘Ohm Nah Omn’ is an intense psychedelic track that is filled with smooth baselines and mesmerising textures which when combined create an electrifying atmosphere. The song begins with a prolonged drive that journey’s you to a dance-crazed zone of lush soundscapes and sophisticated synth layering. The vocal work on the song takes an almost anthem-like form, accompanied with building percussions and melodious pianos. The video was filmed at the Afterhalloween party in Moscow and was created by Rise Entertainment, it’s an artistic expression of movement and colour.