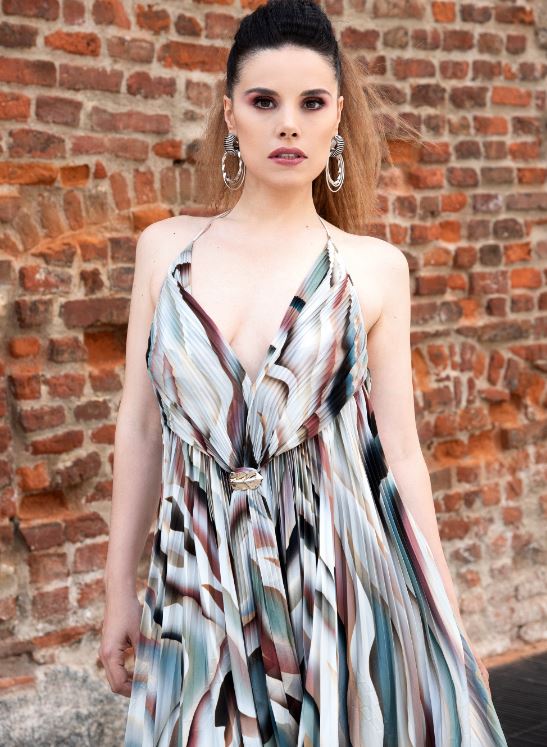 London-based singer/songwriter Vina Rose has been performing ever since she was only a child, participating in various singing and dancing contests. She eventually moved to Milan, where she studied performing arts and earned her 5 years degree in Communications.

Vina can claim various collaborations with significant names of the international and Italian scenes (including the likes of Andrea Bocelli, Giorgia and Alexia). She also appeared in numerous TV, stage and commercial productions, as well as working on her own material.

What are some of your earliest memories of music?

The first time I went up on a stage and sang in duet with my brother I was 4, and I can remember feeling very comfortable in front of an audience, ’cause I was born in a family of musicians, so I guess music has always been in my blood.

I love to start from a topic, ’cause lyrics are an essential part of the song, so I usually begin with writing the lyrics and then I build music on top of that, I find that when you have something to say, then it’s easier to match that feeling on a sound level.

But there are times where the process is the other way round, I start with a sequence of chords, and that gives me inspiration to write lyrics afterwards, so it really depends on what I am feeling in that particular moment, or if I feel the urgency to address a specific story or personal experience. That will dictate my songwriting process.

I really can’t pick one of the two, ’cause for me both are essential aspects of being a musician.
I enjoy so much writing and creating in the studio, that’s the place where I can experiment and play around with my vocals and sounds; at the same time performing live for me is imperative, I can’t replace the feeling of connecting with an audience and share my journey, it’s a need of communication, which is like bread for me.

During a live performance at the Acklam Village Market in London, I met a group of people that told me that my music touched their hearts, they were mesmerised by it and they told me to keep sharing my gift and that that would have left an indelible mark on them all.

That was just incredible, sometimes you don’t realise how much music can affect people’s lives until you witness moments like that, and my mission as an artist is to create music that can be source of inspiration for people, moving their souls.

If you could put together a radio show, what kind of music would you play?

Music that makes an emotional connection with me is what would find its way on the air. Personally, there are so many types of music I enjoy listening and consuming, so perhaps what I would think is to put together a show that every single week focuses in different music genres, soundalikes and moods, similar to what’s going on now with Spotify playlists, in that way I could give space to any sort of music that sometimes is hard to get on the radio, especially commercial radios (for example soundtracks, or more experimental music..)

I would like to tour around the world, having a recognition as music artist internationally and win a Grammy 😉

For me, success is the ability to create incredible music, and getting audiences engaged and listening for the artist lifetime.

One last thought to leave your fans with?
To all my music-loving people: I love singing, writing music, dancing and entertaining. And I love sharing energy on stage with all of you. My plan is to continue my lifelong journey of spreading positivity and authenticity through my music. Thank you all for supporting me to be the best Vina I can be. Stay safe and strong x