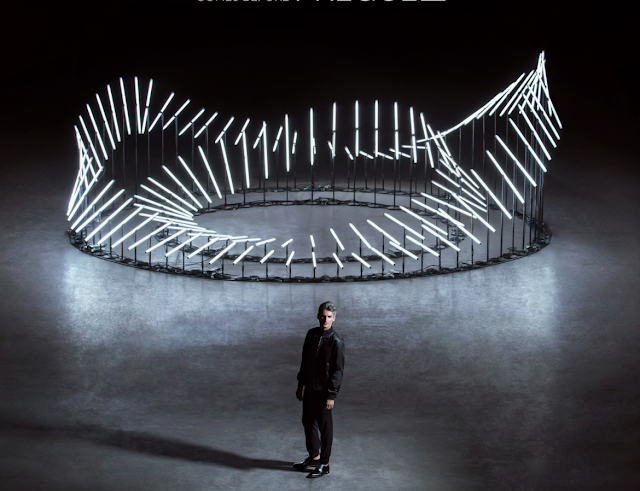 For many years, Thomas Roussel, the man behind the Prequell moniker, has been at the forefront of music performance innovation. From developing revolutionary orchestral staging for Chanel, Kenzo and Dior Homme catwalks to creating a dynamic arrangement of Ravel’s iconic Bolero for the Paris 2024 Olympics, his music is defiantly expansive and experiential.

Musically, ‘The Future Comes Before’ straddles many disciplines, spanning cinematic symphony, sensuous R&B, dark pop, expansive electronica, and so much in between. In line with the album concept, the tracks run in reverse order of numerical value. Beginning with ‘Part XV’ and ending at ‘Part I’, ‘The Future Comes Before’ takes us on a sonic journey of epic proportions.

From the intriguing crescendo that drops cleanly into mind-blowing pop-infused orchestral extravaganza, to the samples of a NASA probe entering Jupiter’s magnetosphere, it is a unique opus that never settles, only evolves.

That collaboration is at the heart of the Prequell project comes as no surprise. His oeuvre has seen him forge scintillating creative partnerships with Jeff Mills on ‘Blue Potential’ and ‘Light From The Outside World’, and compose and record an opera with the Orchestre Philharmonique de Radio France.  On ‘The Future Comes Before’, Prequell enlists the help of some of the best young vocal and songwriting talent: Rae Morris, Claire Laffut, Fyfe, Shy Girls, and Cruel Youth. Providing the instrumental backdrop are none other than the London Symphony Orchestra (Harry Potter, Star Wars) and Isobel Griffiths’ Orchestra (Adele, Massive Attack, Interstellar, Skyfall), with Ben Thompson (Two Door Cinema Club, Phoenix, Hudson Mohawke) on drums.

Recorded in the legendary Studio One at Abbey Road and mixed and mastered by Grammy Award-winners Steve Fitzmaurice (Depeche Mode, U2, Sam Smith) and Randy Merrill (Lorde, Adele, Mark Ronson) respectively, ‘The Future Comes Before’ draws together a team of unparalleled renown and expertise.

With ‘The Future Comes Before’, Thomas is completing his first real personal project. From the first track (Part XV) to the last (Part I), this album is an avant-garde return to the roots of music and a re-birth for Thomas Roussel.