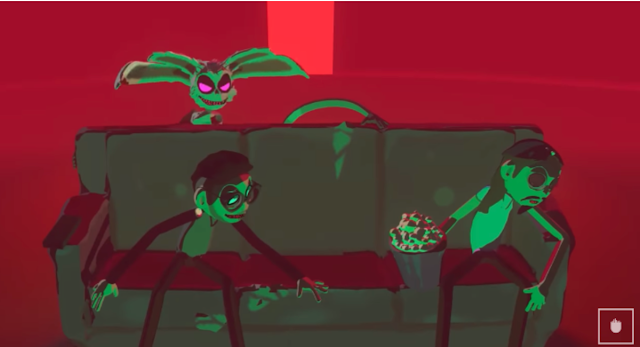 Two-time Grammy nominated DJ and Producer Steve Aoki joins forces with Brazilian superstar Alok for their first official collaboration “Do It Again”. Directed by Reece Charchol, the animated music video follows the duo on a psychedelic journey through alternate realities, as they attempt to escape a shapeshifting evil force, masked as a bunny rabbit.

Steve Aoki, the two-time Grammy-nominated producer/DJ is one of today’s most successful American cross-genre artists, collectively counting 1.5 billion music streams on Spotify, with an additional 2 billion music streams on YouTube. As the founder of the trendsetting record label, events/lifestyle company, and apparel line Dim Mak Records, which he founded in 1996, Aoki has helped launch the careers of global acts like The Chainsmokers, Bloc Party, The Bloody Beetroots, The Gossip, and The Kills, among many others. Dim Mak today counts more than 1,000 official releases from the biggest acts and most buzzing newcomers across EDM, indie rock, hip-hop, and beyond over its two-decades-plus discography.

As a solo artist, Aoki boasts a lauded discography that includes Wonderland (2012), his debut solo album, which garnered him his first-ever Grammy nomination for Best Dance/Electronica Album; The Neon Future series, which includes Neon Future I (2014, certified gold by the RIAA), Neon Future II (2015), Neon Future II (November 2018), and Neon Future IV (spring 2019); and the hip-hop centric Steve Aoki Presents Kolony (2017). His genre-defying collaborations also include original songs with A-listers like Lil Yachty and Migos (“Night Call” from Kolony, 2017); One Direction’s Louis Tomlinson on the global hit “Just Hold On” (2016), which debuted at #1 in more than 40 countries and has since gone gold or platinum in 18 countries; K-Pop idols BTS on the hit track “Waste It on Me” (2018) which amassed praise domestically and internationally, debuting at #1 in more than 60 countries with 4 million streams in the first 24 hours, as well as the #1 worldwide trend on Twitter with 1k+ retweets per minute and has collectively racked up nearly 1 Billion streams on streaming services worldwide; and Daddy Yankee, Play-N-Skillz, and Elvis Crespo on the Spanish-language track “Azukita” (2018).

In 2016, Aoki released the Netflix Originals documentary film I’ll Sleep When I’m Dead, which earned him his second Grammy nomination for Best Music Film and globally released in more than 190 countries. Recognized by Forbes as one of the top 5 world’s highest paid DJ’s and the world’s hardest working DJ, Aoki is “one of the most in-demand entertainers in the world” (Billboard), counting more than 250 tour dates per year, with past performances at nearly every top festival around the world including Coachella, Ultra Music Festival, Lollapalooza, Fuji Rock Festival, Tomorrowland, Electric Daisy Carnival, and more. As a fashion designer/entrepreneur, Aoki has collaborated with major fashion and lifestyle brands like Converse and Bathing Ape and serves as a global ambassador for several international brands including ASICS and Diesel. In 2016, he also debuted his very own Dim Mak Collection streetwear line, which he later presented at New York Fashion Week in 2017.

In 2012, Aoki founded THE AOKI FOUNDATION, which primarily supports organizations in the brain science and research areas and has donated more than $500,000 to date.

Alok is the most listened to Brazilian man artist in the world and the first to reach the mark of 1.06 billion plays on Spotify. Raised in a family where his parents (Swarup and Ekanta) and twin brother (Bhaskar) all perform on the electronic scene, his universe has always revolved around music. His early start made him a proactive producer alongside his brother with their project “Logica.” Combining that with his current solo productions, Alok has been creating music for well over a decade. More than 15 years later, Alok is still relentlessly dedicating his time to his craft. He has become one of the most prominent icons on the Brazilian scene, winning honors and awards including: ‘Best DJ in Brazil’ two consecutive times, and placing at #13 in DJ Mag’s annual Top 100 awards. In 2018 he became the only Brazilian to place on the Billboard Dance 100 list, occupying the 72nd position. Alok was also the first Brazilian to occupy the Global TOP 100 with hits “Hear Me Now,” “Never Let Me Go,” “Big Jet Plane,” “Ocean,” “United,” “Favela” and his recently released hit “Innocent.”

In 2016, Alok toured several countries across all continents, playing the biggest festivals and stages, spreading his style popularly called ‘Brazilian Bass’. That same year, he received recognition for his work and signed with both Dutch label Spinnin’ Records, and William Morris (WME), which is considered one of the most prominent artist agencies in the world.

In 2017, Alok’s popularity expanded to China, making him one of the most well known DJs currently in the territory. Alok also achieved great exposure in the US and Europe, averaging 4 tours in each continent and approximately 15 shows in each region. Other notable achievements include his signing to Warner Music, one of the world’s leading record companies, and his placement in Forbes Magazine’s prestigious 30 Under 30 list.

In the first half of 2018, he performed at major festivals, toured the US and Asia, performed in Mexico and for the first time led an independent electric trio at the Salvador Carnival, drawing a crowd of over 500,000 people at the Barra Ondina circuit.

At the end of April, Alok released the single “Ocean,” a song based on a true story and that featured an 8-minute video / short film starring Rodrigo Santoro, Marina Ruy Barbosa, Genésio de Barros and Maria Manoella. In the second half of 2018, Alok released “United,” alongside Armin van Buuren and Vini Vici, “Favela” featuring Ina Wroldsen, and “Innocent” with Belgian producer Yves V and Gavin James, which premiered in Tomorrowland’s 2018 Aftermovie.