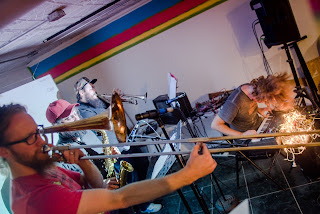 Dan Friel is a master of abrasive pop melody. Whether through his child-sized keyboard, and drum machine on his own, or through his incendiary guitar playing in cosmic noise-pop trio Upper Wilds, Friel’s hooks bubble and froth from beneath a sea of crunching, squelching distortion and feedback. On new album Fanfare, out 13 September, Friel presents an expansion of his sonic palette with the addition of a horn section, including Sunwatchers’ Jeff Tobias, Grasshopper’s Jesse DeRosa, and former Parts & Labor collaborator Sam Kulik, bringing more subtlety and depth to his anthemic turbulence than ever before.

Friel has been releasing music under his own name for over a decade, but has been no stranger to collaboration throughout his career. Blossoming from the dissolution of his long time band Parts & Labor, Friel’s solo work has included collaborations with video artist Todd Bailey, renowned string quartet ETHEL, and indie video game developer Andy Wallace, who designed Fanfare’s cover and whose new experimental game Bleep Space features sounds by Friel. Friel’s work with horn sections began with live performances around the release of his previous albums Total Folklore and Life as ways to expound upon the thundering energy of his music. Fanfare marks the first time Friel set out to create his music alongside the horn players, leaving more room for improvisation and exploration. To leave space for different timbres of the horns, Friel stripped back his own parts, frequently playing them live with the ensemble, and focusing on the organic sound of the group’s unique instrumentation.

Fanfare stands as Friel’s most communal and physical-feeling solo work to date, his deft layering and interweaving of buzzing synths and brassy leads create a new, profound kind of density.