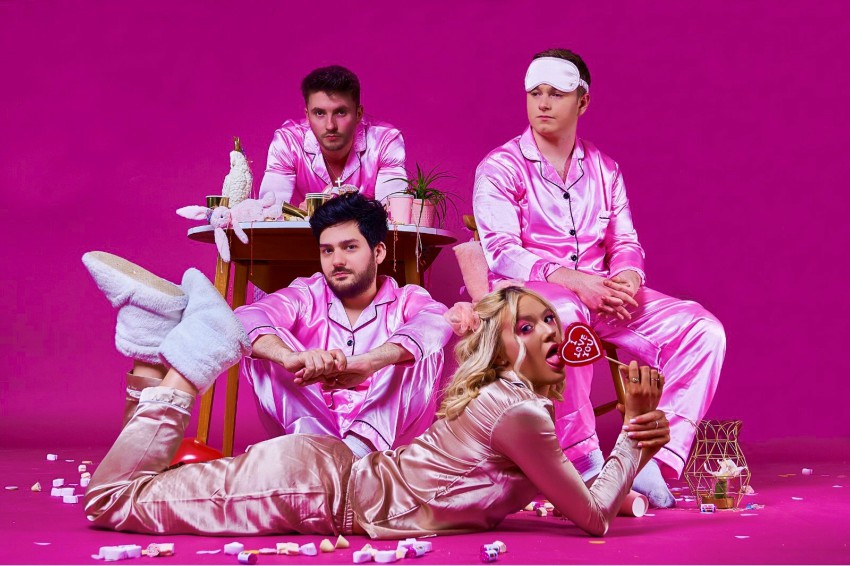 See our exclusive interview with the band below

After launching just a year ago we’ve played some pretty killer shows at the likes of Manchester’s Deaf Institute and O2 Ritz supporting Scouting For Girls. We released our debut single, ‘Favourite Thing’, which went down an absolute treat (we think that was down to the cotton candy artwork though featuring a beautiful cat.) Our second single, ‘Lovesick’, was made Record of The Week on Xs Manchester and the recommended track of BBC Introducing Manchester before it was even released, so that was a proper buzz!

If you could paint a picture with your sound, what would it look like?

One giant, floor-to-ceiling-full-wall-length painting full of loud colour splodges and quirky imagery..like a candy-floss cat!…but it all makes sense somehow…

This is SO tough because we all have completely different music tastes, but musically we’d have to say – Bombay Bicycle Club “I had the blues but I shook them loose”- unbelievable album start to finish. The XX; ‘xx’ self-titled album as it’s just so emotional and beautiful. Vampire Weekend; “Contra”- quirky, fun and lyrically brilliant. Florence + The Machine, “Lungs” – the voice of an angel, and The Stone Roses; “The Stone Roses” debut album – because we’re Manc and it’d be bloody rude not to.

Absolutely loving the band, Do Nothing – their song ‘LeBron James’ is an absolute Masterpiece and feels real ‘contemporary rock n roll’. Working Men’s Club too – similar vibes – ‘Teeth’ is just a belter of a tune. Shoutout to our Indie pals, Freeda, who we love dearly – they’re smashing it at the moment!

In lots and lots of Ubers. Poppyjo actually got an uber to go back to hers because she’d forgotten her hair straighteners but accidentally set the pin to the starting point. No word of a lie, the uber driver collected her, drove once around the block, and dropped her back off. And he legitimately expected to be paid for that journey.

But seriously, our first show was a headline at Deaf Institute so that was just huge. It was such a wicked way to launch, one of the best venues to play and we all got absolutely hammered (during and) after it. Bounced into the Manchester scene in style, we reckon.

The gigs we’ve played so far have been pretty amazing, (and we’ve got some more up our sleeves to be revealed soon!) But I think our biggest achievement was the day we released our first single. Nothing happened (obviously); we had about 3 plays on Spotify and all of them were our mums; but knowing we’d written and recorded a song that truly meant so much to all of us, and put it out there for anyone in the world to hear, with the chance it could relate to them, is just an unbelievably special feeling.

“This song we’ve just written is gonna be MASSIVE!!!!”