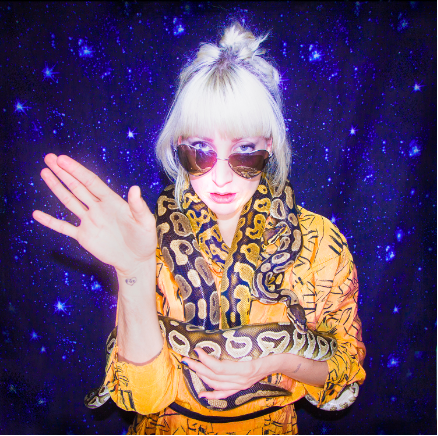 Evelinn Trouble has shared ‘Hope Music’ ahead of her upcoming EP also titled “Hope Music.” The EP will be released via Radicalis on the 4th of May. ‘Hope Music’ follows the single ‘Monstruous’ which received exceptional support from heavyweight publications Clash Magazine, All Things Go Music, Noisey and Variance Mag. The Zurich-born songstress has already received over a quarter million Youtube views, received support from Line Of Best Fit and her track ‘Sunset Everytime’ received radioplay from Switzerland’s Radio SRF3 and was named “The 33 best Swiss rock, indie and alternative songs of the year” by Noisey as well. Evelinn Trouble has performed back-up vocals for Swiss musician Sophie Hunger, collaborated with STRESS, and performed as festivals The Great Escape Festival and Montreux Jazz Festival. The single was released on the 13th of April and explores Evelinn Trouble’s musical diversity.

Evelinn Trouble was first introduced to music by her mother who was a Swedish jazz singer. Born and bred in Zurich, the singer is influenced by musical heavyweights like Frank Zappa, Nina Simone, Karon Dalton and Jimi Hendrix with a musical style that can be compared to Thom Yorke and Patti Smith. In the same manner as her debut, Evelinn recorded and produced this release herself, in attics and hotel rooms across the globe.

Evelinn Trouble, although reputed for her dark, eerie songwriting speaks of “hope” and “optimism” on the song ‘Hope Music.’ She delivers warm, light-hearted lyrics over an attitude-filled dance-beat, lamenting with fervor that “Hope Music“ is gonna save her soul. But in typical Evelinn Trouble style; the lyrics scream “I don’t wanna feel dead anymore“ directed at life as an outward cry: “this song is about more than getting up in the morning with a smile, this “hope” is about survival, “I don’t wanna feel dead anymore“, and maybe that’s as optimistic as it gets in this cynical age of now.”

Speaking of ‘Hope Music’, Trouble comments: “I was struggling to see anything in a positive light and I suspected that it had something to do with the music I was writing, which tends to be melancholic. I thought if I’d manage to write something life-affirming, things would face up. But in order to write something, I have to feel it first, so I made a big effort to teach myself to “think positive“. I became obsessed with the idea of self-transformation, got really into sports, healthy living, meditation, quit alcohol, all sorts of things to turn myself around. Hope Music was written in that obsessive phase, very blissful but delusive. I see it differently now; staying positive is an ongoing challenge and not something you can achieve by writing a hopeful song once.”