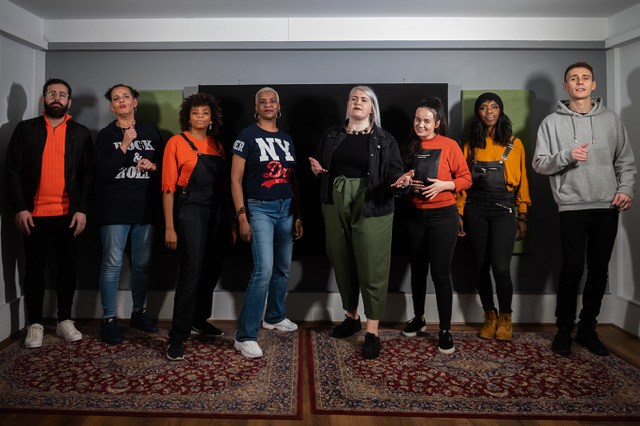 After establishing club nights in Liverpool, ​Duo-Tone then went on to strengthen the brand with an eclectic mix of consecutive House, Electronic and Nu-Disco releases. Recent singles came from the likes of ​KOVA (which hit the ​Upfront Club Charts Top 10​) and ​Josh Hunter (which has received extensive support from ​Radio 1 and ​KISS FM​). They have now expanded beyond their label/event format to present their own tracks, collaborating with the best new talent, under the name of ​Duo-Tone Productions​.

Sense of Sound Singers previously collaborated with ​Duo-Tone Productions to reinvent the ​Aly-Us classic ​‘Follow Me’​. The track was later remixed by Swedish beat-master ​OPOLOPO​, landing a ​Top 10 position in the ​UK Music Week Club Charts ​and earning a place on the ​‘Take Me To Church’ compilation from Midnight Riot Records​. This time, however, they have been allowed to fully express their creativity and help concoct this fully original track flavoured with Disco rhythms.

Sense of Sound Singers is an award-winning collective of phenomenal vocalists, renowned for delighting and thrilling audiences locally, nationally and internationally. Their incredible talent has been recognised across the UK and beyond, leading them to become the resident singers for ​Cream Classical and perform backing vocals for many big names. According to the choir’s ​creative dynamo, ​Jennifer John​, the new single is packed with ​“Feel-good Disco vibes” which is exactly ​“what Sense of Sound love to do”. Over the past 12 months, they have continued to grow and expand on all fronts.